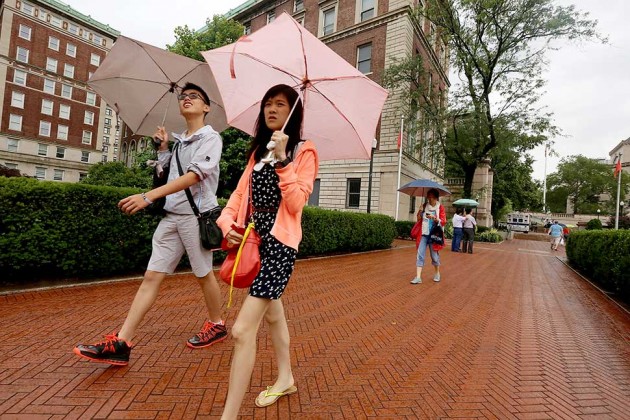 By Julian Sparks July 24, 2014
Students from abroad who study at U.S. business schools often struggle when it’s time to land a job. Increasingly, B-schools set aside resources to help this group overcome a pair of career obstacles: the difficulty of getting legal permission to work in the U.S. and cultural differences that can make navigating the American job market difficult.
In 2012, around 13 percent of the 472,000 students enrolled in U.S. business schools were from other countries, according to the U.S. Department of Education. Schools have a lot of reasons to love foreign students. For one thing, they’re likely to pay the full cost of nonresident tuition, since they’re generally not eligible for federal aid. They also make a student body more diverse by some measures, a statistic business schools consistently struggle to improve. “International students are a terrific resource: They are independent and bring a lot to our program,” says Karen Dowd, assistant dean of career management at Simon Business School at the University of Rochester.
But these short-term immigrants, largely from China, India, and South Korea, according to a report by the Institute of International Education, a research and training organization, might offer top U.S. B-schools a bigger benefit than they take away. Of the students who come to the U.S. for business school, 87 percent hope to use their MBAs to get jobs in the country they studied in, according to the Graduate Management Admissions Council. Many will be disappointed. International MBAs most commonly go after an H-1B visa, which are limited to 65,000 per year for the general population, plus an additional 20,000 for those with U.S. advanced degrees. This year, roughly half of all H-1B visa applications were rejected, according to U.S. Citizenship and Immigration Services, a division of the Department of Homeland Security.
Before the battle for these scarce visas begins, international students first need to pass muster with an employer. Doing that means learning the vagaries of the U.S. job market, where individualism trumps collectivism and students are expected to work just as hard at rustling up interviews as they do in class.
Students who are used to a more formal professional environment can seem robotic to American employers, says Judy Shen-Filerman, a consultant who works with universities to help their international students succeed in the U.S.
“They feel uncomfortable [sharing] personal stories and have a missing link with their confidence,” said Cheri Paulson, director of the Graduate Center for Career Development at Babson College’s Olin Graduate School of Business.
Encouraging students from outside the U.S. to work the recruiting circuit presents its own challenges. In some Asian countries, “one’s future potential is inextricably tied to academic success,” says Shen-Filerman. If they assume their grades will speak for them, they might not be prepared to impress employers.
Many have to get comfortable about bragging about their accomplishments, something that doesn’t come naturally for students from South Korea, Saudi Arabia, and certain Latin American countries, where it is considered uncouth to praise yourself, says Shen-Filerman. She drills individualism into students, reminding them: “I’m visible, I’m credible, and I can make a difference.”
These issues haven’t gone unnoticed by schools, which rely on strong job-placement statistics to attract students. Many have implemented programs or hired staff that help bridge the cultural gap. The Simon Business School at University of Rochester, which has one of the highest rates of international students among the U.S. MBA programs Bloomberg Businessweek ranks, at 63 percent, has a cultural liaison on staff who teaches students about personal branding and communication.
The cultural counseling starts early at many schools. The Sloan School of Management at MIT, the Merage School of Business at UC Irvine, the Goizueta Business School at Emory University, and others offer a special international-student orientation week to give non-U.S. students a head start bridging this gap.The University of Washington’s Foster School of Business, where 41 percent of MBA students are international, has a special two-day career development training for 15 to 20 Chinese students in Shanghai a few weeks before classes start.
Yet schools and consultants still recommend a backup plan for even the most culturally adapted transplants, such as seeking out multinational corporations. The Optional Practical Training (OPT) visa allows international students to work in the U.S. for one year, then transfer to an office abroad if they aren’t able to stay in the country.
Boston University’s School of Management suggests foreign-born students run a dual job search, in the U.S. and their home countries, to make sure they are employed after graduation, says J.P. Matychak, the school’s assistant dean for career services. The odds, he says, are stacked against them. “International students face an uphill battle when getting jobs in the U.S., from lack of visas to employers unwilling to take a risk.”

Learn more about our coaching and consulting programs

Get Judy's perspective on business and Life