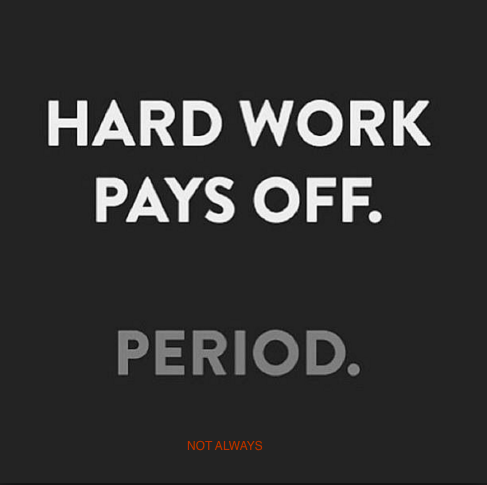 I conducted two workshops recently and debunked a widely-held myth that “if I work hard enough, I’ll get noticed and rewarded in my career.”

So many professionals believe that if they just work hard, it’ll pay off.  Their managers will notice.  They will be rewarded accordingly.

So not true if you’re a power culture “outsider”.

Hard work and efficacious results gets you a table in the office. It doesn’t necessarily give you better projects or a bigger title and office. I’ve seen this too often in the last decades.  More so than ever as I coach people toward career success.

Many persons of immigrant heritage (even those who are multiple generations), but especially folks of my heritage, the Chinese (and all East Asians) believe that hard work gets you the “top seat”, akin to their experience in test-based academic settings. But the work world, in all countries, but especially in the US culture requires a different skill set that eludes many — social sales acumen.

Visibility of your achievements, your leadership capacity, does not come from just working hard.  It’s the result of letting others know about what you’ve done and the contributions you’ve made. “Self-promotion” is like a dirty word in many immigrant cultures.  Many come from humble, self-effacing cultures. It’s totally understandable to be humble if we’ve grown up with family and communities that reward silence about achievements.  But the US organization is a different culture. It believes in a fundamentally different way. US organizational culture is steeped in the belief that if you did something worthy, you’d talk about it with others. If you’re not talking, you probably didn’t do much.

As I work with individuals and groups, I see again and again, the struggle these individuals wrestle with, to get out there to talk about their work, to tell their managers how much time they really put into the work, taking credit back when someone else took credit for their work. I understand.  It was so hard for me to learn to talk about myself. It was excruciating.  At times, I just wanted to throw up.  I wanted to run away.  But I kept at it, despite my terror and feelings of insubordination to my parents’ core teachings.  I kept at it because I wanted self-respect.  I kept at it because I wanted equity. I kept at it because I didn’t want to be taken advantage of.  Like my father was. Hard working. Quiet. Respected. But always passed for promotions. I vowed to do it differently after watching him languish in corporate America for decades.

What I know for sure is that the road to workplace visibility for immigrants and cross-cultural professionals is a steep uphill.  As we climb, we must adapt to a different climate. It’s not easy. There is sweat and tears. But the brave are rewarded by advancement and better compensation. The daring get paid equitably. In the end, for those who dare to trek and jump, we find out that we didn’t give up our family values, we simply expanded our values. After all these years, being humble is still my preferred modus operandi.  I’ve just learned to shift almost seamlessly now. Seamless but always conscious of my shift.

So let go of the “hard work pays off” thinking.

View all posts by: Judy Shen-Filerman